It hadn’t happened since the early 90s till now – a father and son in the 1st XI.  Congratulations to Ben and Harry Passenger.  Who will be next? 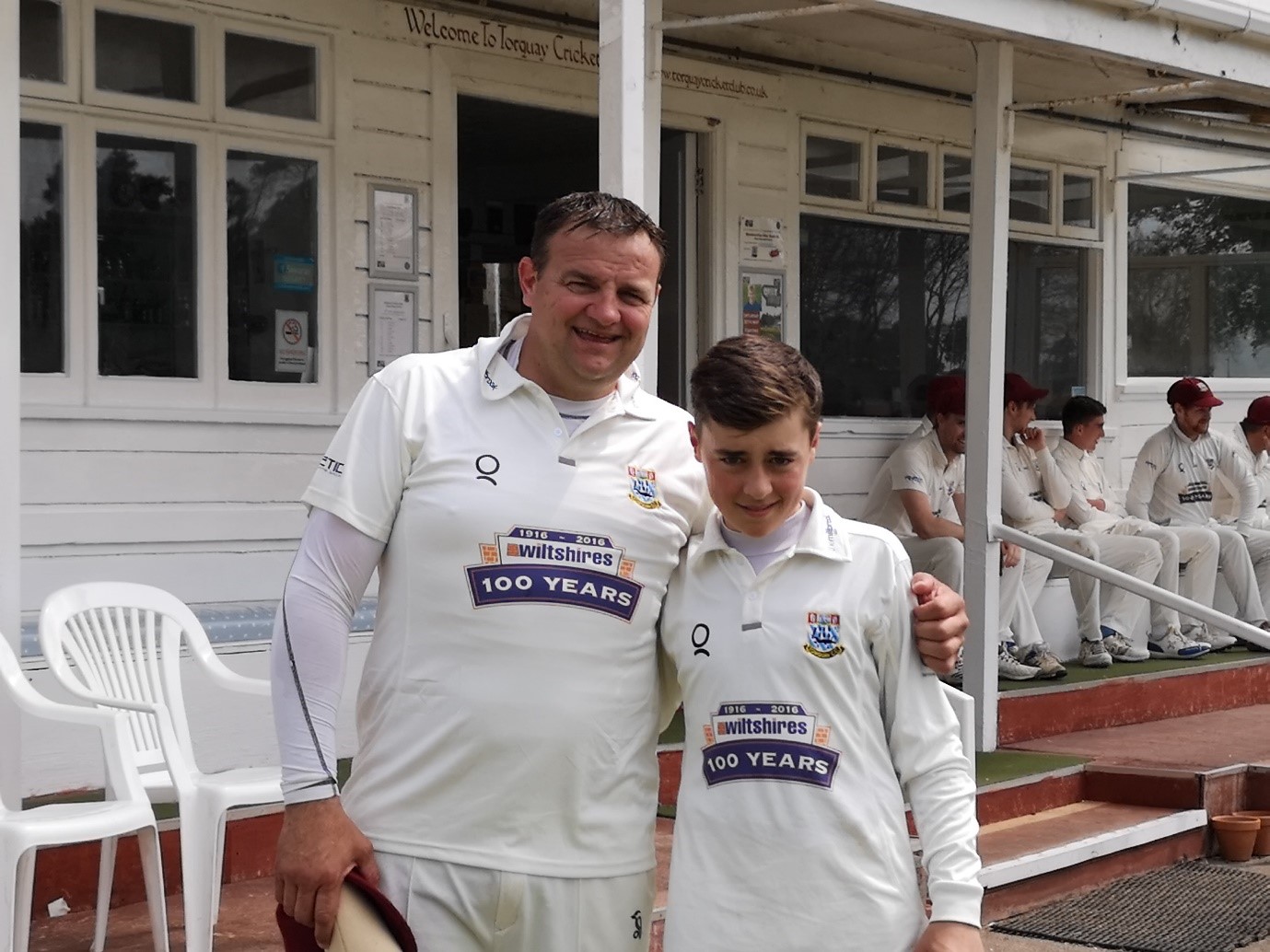 Two main bowlers short and you come up against two first class batsmen – sadly the inevitable happened.  Exeter did though have to include former Torquay CC 1st XI skipper, Mark Gribble, after a late drop out.

Exeter won the toss and decided to have a bat.  Enter Ben Green who has opened with Marcus Trescothick when playing for Somerset.  Green went onto score 166 which included 20 * 4s and 4 * 6s before being caught in the deep by James Degg, who tweaked something in the process, off the bowling of Elliot Moses.  Green was supported initially by Dominic Tuohey (46) and then by Harvey Sargent (56 no).  The best of Torquay’s bowling was Elliot Moses with 2 for 38.  However, special mention must be made of the Passenger’s.  The old warhorse, Ben for getting through 10 overs on the trot in the first power play and only going 4.2 runs per over and young Harry for bowling with so much maturity – Green shows mercy to no one.

Torquay’s run chase got off to a good start with James Degg and Chris Kelmere, the latter hitting a remarkable 6 off the back of the bat down to 3rd Man.   Calamity though struck in the 10th over when Kelmere was trapped LBW by Tom Lammonby and next bowl George Allen nicked behind to Robin Fern.  Soon afterwards Elliott Moses was clean bowled by Dominic Tuohey.  This left Degg and Tim Western chasing an improbable victory.  Western rolled back the years with a half century.  Once Western was out it was game over but Degg on one leg went onto score 92.  (An injured Degg is a dangerous Degg – playing against us last year for Plympton, despite a bad back he scored big.)  The Passenger’s batting together did manage to secure a vital 4th batting point.

The 2nd XI travelled down to face Ivybridge 2nd XI and came across a batting unit where everyone contributed.  Zach Dunn lead the way with an unbeaten 96 ably supported Sam Northmore and Simon Kidd.  Dylan Karssens was our most economic bowler going for 4 an over, but non, of the economy rates were a disaster.

Opening the batting, Olly Latto came of age with his maiden 50 in senior cricket – congratulations to Olly.  Unfortunately apart from cameos from the evergreens Matt McCann and Ian Baker, no one really got going and Torquay fell 56 runs short but thanks to Olly’s 72 which included 10 * 4s  did secure all 5 batting points.  The Ivybridge bowlers like their batsman were a unit with the wickets being shared around.

The match though did see Bobby Western celebrating becoming a teenager by making his 2nd XI debut in a side already containing big brother.  Grandma Sandra did have the pleasure of having to record a 4 for him before he was out caught.  No news yet on whether Grandad Ian was the umpire that had to give him out!

A difficult choice between James Degg and Olly Latto, but it has to go to Olly for coming of age.  However, the superb fielding in the deep by young Harry Passenger certainly rates a special mention – his arm for a U14 is the best I’ve seen in 30 years.