It’s now been a few weeks since completing the ride. My legs are still in ridiculous shape, my bike is now recollecting dust in my garage but luckily the saddle sore has recovered ! 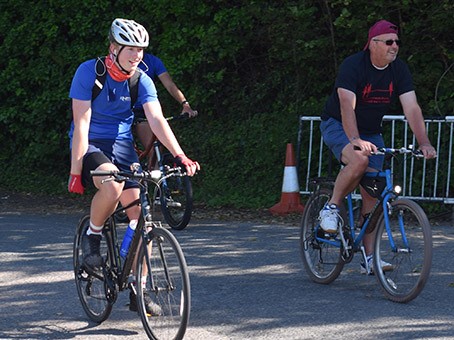 Deciding on the ride took me a combined total of roughly 20 minutes. I had finished work on the Friday and decided to have a chill weekend before my weekend and got royally drunk on cider on my own Saturday night. Waking up around 12 on the Sunday I’d decided to go for a ride to cure the hangover. After my afternoon ride, I thought to myself, I wonder whether I could do this for a whole day or a ridiculous amount of miles. And from that stemmed the idea. I had always wanted to do a big event following dads attack but never had the time to sit down and plan or the time off from work where I was motivated enough to do it ha-ha.

Day 1 was a nice light and breezy ride, a sort of get over the line ride just to see whether I could continue with it for the 7 days. Over to Bovey Tracey and then across Brixham and Berry Head.

After the first day I must’ve bumped my head very hard because I crazily decided to cycle to the Avon Dam. It was looking bright as we had already exceeded our £500 target. The second day I climbed higher than Ben Nevis but completed it in what felt like an eternity!! Hill after hill and then came the Sod’s law moment, after descending what felt like the only downhill slope in Devon, my chain decided to come off. Not once, or twice, three bleeding times. I was in such dire shape that I called my good friend Fletch to leave supplies outside his house for me which he kindly agreed to (thanks pal). By the time I arrived home on Tuesday, it was late and dark and my head was fully gone after google maps deciding to take me up a mountain.

Day 3, a companion awaits. Dreary and lacklustre after the day before, I dragged myself onto my bike for Wednesdays ride. This time though, I had extra help and motivation as I would ride a stretch with one of my brothers Alain. We met at Starcross station and took the coastal path to Exeter. Coming through Teignmouth and Dawlish has been tricky but having Al waiting at the other end was a big help. On arrival in Exeter, Al pointed out my tyres looked a bit soft. It was when we arrived at our destination when I found out my tyres PSI level was at 25 and should be mid 80’s. In essence, I’d been riding on flat tyres for 2.5 days GREAT. After a close call involving a fox on the road on the journey home I managed to get home safe and sound without too much leg pain. As well what seemed new tyres.

Day 4, another head bang must’ve occurred. Here’s some great ideas, let’s change the original 250 mile target to 350 miles as well as riding to Haytor. The worst part about this day was the fact it took me what must’ve been around 45 minutes to climb a hill, only to find out its only 4 miles long All that effort for such little reward was definitely a killer and with the Avon Dam nightmares still fresh in the head my head was flying again. A makeshift route took me over the 50 miles and day 4 was definitely when I was taking in the enormity of the challenge I’d set myself.

Day 5, almost there!! After many discussions with my parents, I’d picked a route that involved very flat roads and very little hill. Another makeshift day but with the way my legs and glutes were feeling I just needed to get through the day without burning everything for the weekends rides. Another Brixham visit and weaving in and out of the back roads of Newton Abbot to make the mileage was a chore but we got there.

Day 6, some more company finally. An old football friend Will had seen what I was doing and offered to ride with me on the Saturday and Sunday. He offered a new route and we breezed around Newton Abbot and through to Dartmouth. Having Will setting a very quick pace definitely helped as I was clambering to keep up with him. Although was also the most infuriating moments of my life as he cruised up hills in his pro bike whilst saying “keep up big guy.” Thanks Will for that. We had another snag when, on the final stretch of the ride, Wills tyre popped. As I only had 2% battery and I was worried about my Strava not registering my mileage I left him in Torquay seafront whilst I rode the final few miles home. He managed to make it home after fixing his tyre so don’t worry folks.

Day 7. I woke up in the morning in almost a daze. The week had flown by in retrospect and I couldn’t believe it was the final day. The morning of the ride I was concerned as I was unsure whether we would reach the 1.5k which I wanted to get before the end of Sunday. Accompanied by Sam and Will the brothers as well as a close friend of ours Palms, we set off on the final day. My favourite of all the rides was the Exeter one. One with a few challenging climbs but lovely scenery too. With an ETA at the rugby club of 4pm we had an early start and needed to ride quicker than we had after some small delays at the start. The initial plan was to mirror the whole Exeter ride and do another 58 mile ride. Upon finishing the coastal path, after a few selfies and group photos of course, we realised we could not do the whole ride without getting back insanely late for the gathering crowd.

At the swing bridge we had our short break and worked out we had just under 2 hours to get back to Torquay. Averaging 27 mph along the coastal road in strong winds back to Teignmouth was good going but a few heavy stops as my legs packed up weren’t helping things. Will and Sam decided to go ahead so they could meet me and dad at the rugby club with a bike for him to ride. At some point in Newton Abbot I also lost Palms so was once again riding on my own. This stretch back into Torquay was my least favourite part of the whole ride. With the legs getting ever heavier, I started thinking majorly about why I was riding and everything that had happened with dad and actually got a little emotional coming through Kerswell (luckily the glasses were on). I finally made it to the meet point with dad and, at around 4:30 on Sunday we completed the final stages of my ride together!!!

I have been told I made a speech following but in all honesty I can’t remember probably the hour or two after the ride. All I know is that I tucked into a delicious Dominos followed by a few tinnies and then remember getting into my bed. One of the hardest challenges I have had to complete but I am so proud to say that I have. Thank you to everyone who donated, liked, shared, retweeted, turned up to cheer on at the rugby club, sent messages of support as well as called and texted to provide extra motivation. I’m pleased to say now the total has peaked at a little over £2100!!!

Definitely something I won’t be doing for a while now.

You can still donate to Neal's worthy cause - The British Heart Foundation, by following this link ...