The 1st XI took on Heathcoat CC 2nd XI – both sides weakened by public school commitments and in the case of Torquay, also a 21st Birthday – Kazi Szymanski hope you had a great day.

Heathcoat won the toss and asked Torquay to have a bat. The innings was very much of two halves but one family – Steve Lewis led from the front first half scoring 50 before chopping the ball onto his own stumps. He then passed the baton to his cousin, Tom Drake who finished undefeated on 55. The only other knock of note was James Tyler with 27. The best of the Heathcoat bowling was Will Thompson with 3 for 27 and their skipper, Dylan Penberthy with 2 for 41. Torquay finished on 188 for 9 in their 45 overs. Debutant, Niall McCarthy, wasn’t required to bat, having scored freely for the 2nd XI this season. However, the experience, being with the 1st XI can only benefit both the club (four fifteen year olds in the 1st XI) and himself.

In reply, Heathcoat were soon in trouble at 30 for 4 with young James Tyler claiming 2 wickets and captain / vice-captain combination claiming the other 2. No Heathcoat batsmen seriously troubled the scorers – Joe DuGay with 14 was the best. There was though a brief flourish at the end by their no.11 – Himansh Aligh with an undefeated 10. The best of Torquay bowlers were Chris Kelmere with 3 for 11 and James Tyler with 3 for 15. Heathcoat were all out for 73 in just 27.1 overs.

Part of Torquay’s victory was watched by the mastermind of the Glory Years of the mid 90s – John Morgan, deep in conversation with Ian Baker (in cycling terms, a contender for the red polka jersey in the Tour De France – his heart and lungs still know no bounds). 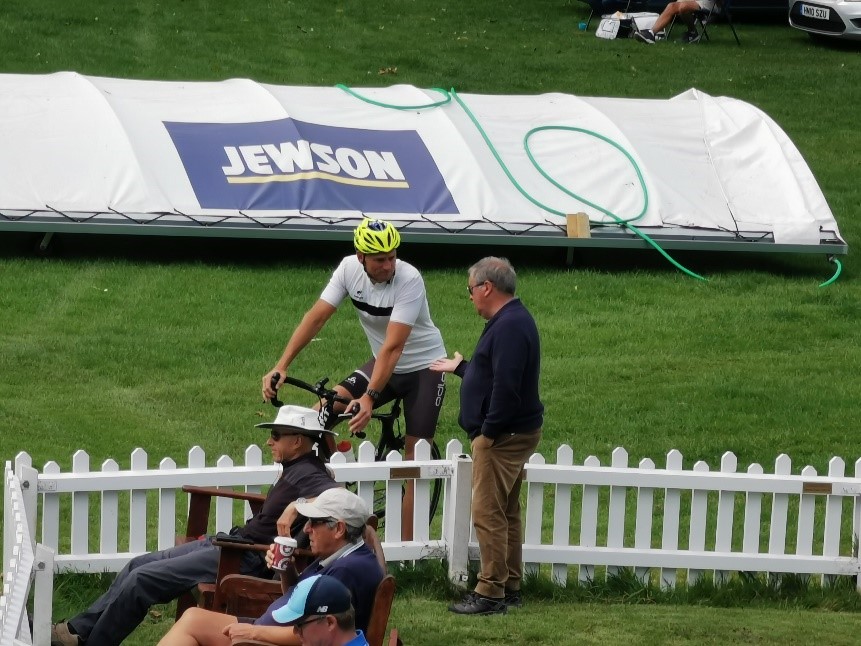 went home and possibly Marcus Green who played for the club for several years. Another player with Torquay connections, is young George Tapley, father, Simon was part of the great Colts XI of the mid 1980s which formed a large proportion of the 2nd XI at the same time.

Once the rain cleared and mopping up was complete, the 2nd XI hosted their counterparts from Ivybridge in a match reduced to 30 overs per side. Both clubs played within the spirit of the game with very little strengthening from the 1st XIs.

Following the rain, Torquay won the toss and elected to field. Whilst none of the Ivybridge batsmen reached 50, Simon Kidd was undefeated on 45 and Andy Johnson scored 41. Their total was helped with some wayward bowling – 40 extras of which 30 were bowling extras. Matt McCann and Dylan Karrsens both claimed 2 wickets for Torquay but special mention must go to young Beau Rider on debut claiming the wicket of Andy Johnson. Ivybridge finished their 30 overs on 208 for 8.

Torquay opened their reply with father and son, Tim and Daniel Western. Whilst Daniel fell cheaply (unfortunately a common theme for most of the Torquay batsmen), Tim on a rare outing for the 2nd XI top scored with 37. No other Torquay batsmen troubled the scorers unduly and Torquay were all out for 102 in 25.3 overs. The best of the Ivybridge bowlers was James Ferriman with 3 for 22.

Torquay CC 2nd XI return to action next Sunday at The Rec in the Brockman Cup Semi Final against Lustleigh CC 1st XI with umpires calling “Play” at 11am.

If successful, the opponents in the final will either be Paignton CC 3rd XI or Ipplepen CC 2nd XI - umpires will call “Play” at The Rec at 3pm.

Well this week it is going to be a family affair – with joint winners, Tom Drake and Steve Lewis.