Some ten weeks later than planned and not in deepest Mid Devon, Evo will be available to score his 600th consecutive DCL match for the 1st XI when Torquay play Bovey Tracey 2nd XI away. Evo though being a traditionalist, whether he will see it as the real match 600th only he can decide in these extraordinary times – not dissimilar to War Time Football. Had these fixtures not come under the DCL banner, Evo was seriously considering the unimaginable – a sabbatical!

The last six years since match 500th has certainly been one massive roller coaster for Evo. The Glorious Summer of 2015 started early for Evo – siting in a youth hostel in his spiritual home, Australia. He got a text from Pethy snr to say,”Pethy was joining Torquay” and responded with “I didn’t know we were starting a Veterans XI!” The day “Cricket Came Home”, Evo had an ambition and the instructions to Yauy were “I can’t have my car with me.” Yauy dually obliged and acted as taxi service. Torquay had never won a top flight title during a match with Evo scoring till then. On confirmation the title had come home, Evo broke a habit of a life time and opened a can in the scorebox during a competitive match. As he said, “It had to be done!” His one regret that day he couldn’t quite slow the umpires up enough to allow Torquay to walk out to bat as CHAMPIONS! 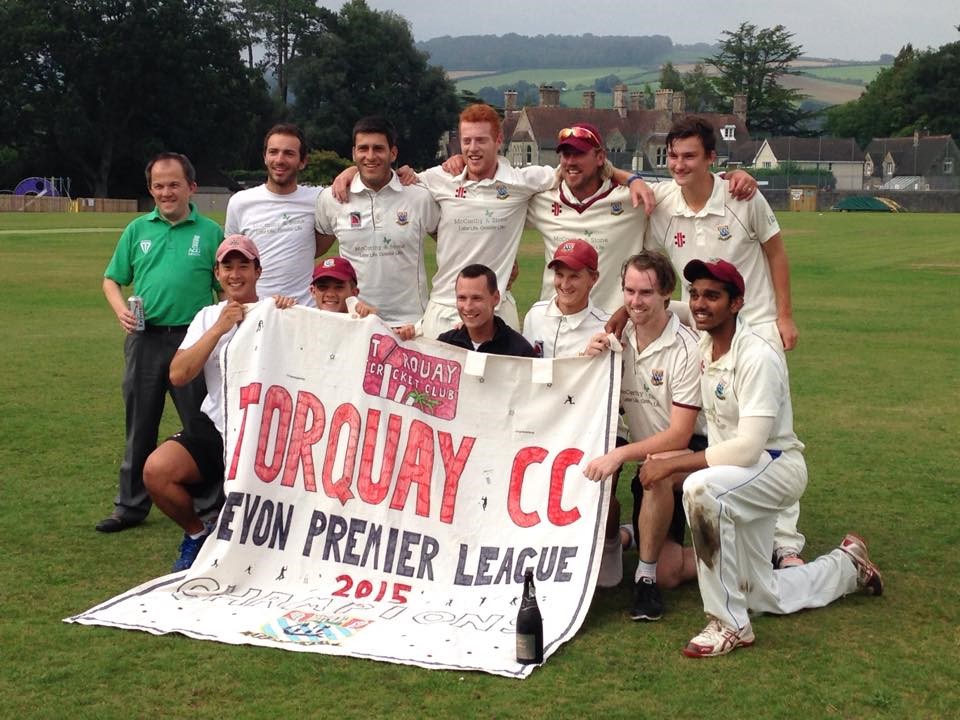 First year post the Yau Dynasty had one of those moments and we aren’t talking about the limbo dancing! The home fixture v Cornwood will always be seen as Mitch Pugh’s match. On probably one of the hottest days of the summer though, Whiters (Lynne Whitfield) their scorer having found Evo’s refreshment supply the previous season set him the “what flavour ice cream shall we have challenge” – Evo successfully completed the challenge with logistical help from Jackie Baker and her kitchen crew. To top it all though, after the match there was a first, Sonny Baker playing his first home match for the League 1st XI asked Evo after the match, “Is there anything I can do to help you” – Evo nearly fell off his seat!

Whilst playing a 2nd XI on your match 600 might not be seen as the greatest. Evo can see another side to it. His match 300 was against Bovey Tracey 1st XI the year

after they won the league. Due to club politics though the entire 1st XI had left during the close season so it was effectively their 2nd XI. All those years later match 600 will be against their 2nd XI. The only likely survivors for Torquay from match 300 will be Mike Pugh and Tim Western (well unless the captain from that match, Ben Passenger or the star bowler from that day, Ian Baker, make surprise appearances for the 1st XI).

Covid19 restrictions will put a dampener on any celebrations with the need for everyone to drive themselves to matches. Evo might like Carlsberg Export (apparently) – but if he has the car he doesn’t even have a half.

Even after 600 matches, Evo still has ambitions to knock off his bucket list. The closest he got to one was ironically against Bovey Tracey. Evo has always wanted to score in a DCL match with a lady playing. Andy Fairbairn was captain of Bovey Tracey one particular year and the week before had selected his wife (a former England player). The following week though, he had dropped her!

One thing is for sure though, Evo will have to wait for his 50! Yes his 50th ground on Devon he has scored on! That is now likely to be 22nd May 2021 – Landspeed Meadow the home of Cullompton CC. By then Evo himself will have actually turned 50!

To put Evo’s longevity into some context his debut was just 21 days after the Hillsborough Disaster – YNWA! (Yes and he did support them growing up!)