In 1957, when I was just thirteen, I well remember being one of the many helpers on the scoreboard for the September Festival games & being inspired by watching the many Test players who took part in these matches.

l first played for Torquay in 1959. Leo Matthews (no relation) was the 3rd XI captain at the time, & there has never been a better club man. He served the club for over 30 years, many as the captain & wicket-keeper of the thirds, bringing on the youngsters as well as keeping the seniors happy. He then became the bar steward & finally a dedicated committee man.

By 1960 I was playing for the 2nd X1 & in some midweek games at the Rec. How great it was to play on this superb wicket & learn the game from the various professionals who were playing in those days. Two years later I made my first team debut under the captaincy of Ted Dickinson.

Jack Kelly was the professional then. He was a tough no nonsense northerner who was a superb batsman & a top class left arm spinner. He took a stack of wickets, including all 10 in one innings for Devon. Batting with Jack taught me a lot & it was in partnership with him that I scored my first hundred for the club.

He was followed as club pro by Derek Semmence, the Sussex all-rounder, & he was succeeded by Chris Greetham of Somerset. Chris was a very hard hitter & kept the members busy fetching the ball from the duck pond! Jackie Fox (another ex-pro) was the wicket-keeper in this very strong 1965 side, which had the benefit of a first class bowling attack with the very fast & hostile David Post, medium pacer Ben Williams & off spinner Roger Matthews ( no relation). At this time the, pre- league, Saturday fixtures were super competitive & none more so than the local derby against Paignton. Dickie Bird was their pro then & we certainly loved to beat them!

Ted Dickinson had retired from playing by now, but was still very influential at the club, becoming Chairman & eventually a long serving President. For many years Ted loved to umpire, though his involvement didn't stop there as he used his contacts & influence to ensure that Torquay fielded strong midweek teams. We always played 2 or 3 matches each week (from May to the end of August) & the standard was very high.

There were many strong regular tourists & the Heffle Cuckoos still tour even to today. I was luckily in the position to be able to play many games & gain experience by playing with & against these players.

I was elected club captain in 1969 & at 25 was the youngest ever to hold this position. I was surprised but very proud, & enjoyed four great seasons as skipper, before handing over the reign’s, so I could concentrate on being captain of Devon, which I did for twelve years. 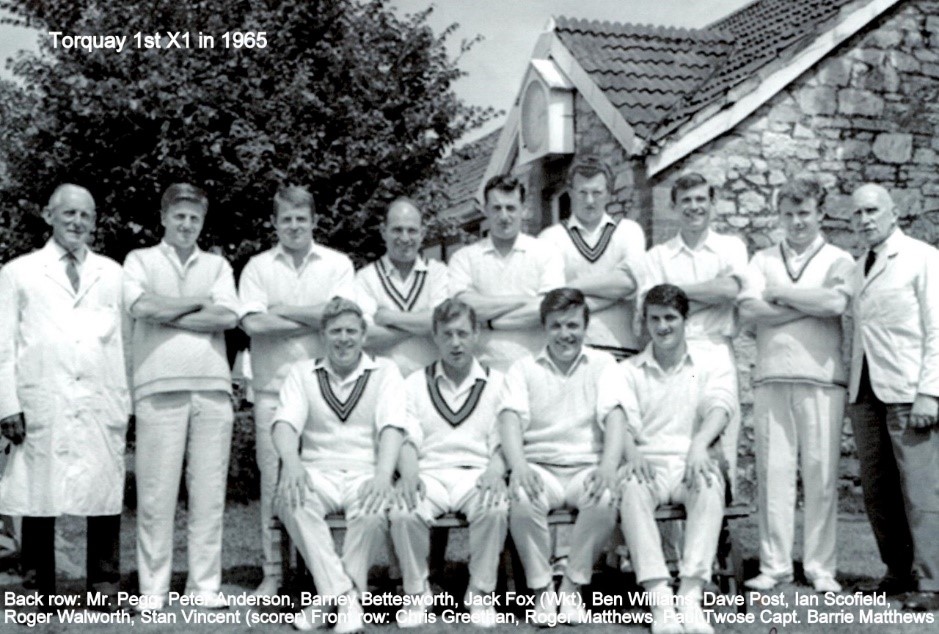