What strange times we now live in – usually at this point of the pre season we would be planning to get the pavilion and bar ready for another busy year, put the picket fence out, cut grass, paint benches etc etc. It remains to be seen if we play any cricket in 2020 - but just in case our sport can resume you might like to know that a small band of volunteers (Ian Western Ian Baker and myself) are doing a few things quietly in the background, independently working, following all guidance given from the ECB and Government re social distancing. The square needs to be watered and cut and long grass on the outfield needs to kept under control. Ground maintenance is still (at the time of writing) allowed and deemed essential work. If left to grow as high as a meadow there is no way back any time soon for decent wickets. I guess you could call the present situation definitely one of the “Lows” in our history.

My association with TCC goes back to 1971 when as a shy 19 year old I had the good fortune to be introduced to the Club by my Uncle Ted – “Mr Torquay Cricket Club” as many would remember him. The third team then, ably lead by Leo Matthews, mainly consisted of experienced (and very decent) cricketers with the odd newcomer allowed! This was before the era of organised junior cricket so the pipeline for new players was basically school leavers. I was immediately made very welcome but quickly realised you had to fall in line with the expectations of the skipper – you had no choice about taking turns to do the scoring and umpiring and certainly no option to skip the after match drinks with team mates and opposition. It was also mandatory for all team members and wives / girlfriends to meet at the local village pub when playing away games, usually 2 hours before the match to get refreshed and discuss tactics. You can tell we took our sport very seriously! I made life long friends from this era.

The third team played at the Sea End with short boundaries alongside the main match taking place on the square. The extra thirds (4th XI) played wherever they could find a pitch, such as Stoodley Knowle. Everybody knew each other, whichever side you played for, as it was a big part of the culture then for all teams to report back to HQ on Saturday evenings to compare notes from wherever they had been playing. As you would imagine the bar was packed until closing time. The Club would employ a full time Bar Steward for the summer as the bar was so busy. Society was a little different then with nearly everyone wanting to play sport and of course cricket was still active in all schools. I think this period for the club until probably the mid 80’s can rightly be called a “High!”

When I joined the club it was also a boom time for Midweek cricket. Nearly every major Bank and Insurance Company would send touring teams to Devon for a week and I think Friday was the only day when no matches were played to give the poor groundsman a chance to prepare for weekend matches. When I was on holiday and available for selection it was a highlight for me as a third eleven cricketer to be selected to play in what then were very strong teams against strong touring clubs. Midweek cricket gradually declined from the 90s with fewer organisations allowing their employees time off for a “Jolly” and we now only see a hard core of long established clubs coming. The decline of Midweek cricket from what it was in the 1970’s perhaps can be described as a “Low.”

During the 70’s and 80’s Torquay Cricket Club was identified as a first class venue. The older ones amongst us will remember the numerous occasions the ground was used by Somerset County Cricket Club as a venue for their John Player Sunday League matches – temporary stands were

erected to accommodate up to 4000 spectators – the theory being, at that time with the holiday season in full swing, Somerset could attract a much bigger crowd here than they would get at Taunton which would make it worthwhile. The last first class match played here I believe was Minor Counties v. South Africa in 1994. I think we can safely call that era a “High.”

However, with big crowds came some problems too. Despite some warnings that we were not following licencing laws to supply beverages to thirsty punters, we were caught out. Plain clothes policemen purchased drinks at a big match without being properly “signed in” and it was at a big price to pay. Our alcohol licence was withdrawn for 12 months. I so remember our dear and departed friend Gordon Baker, who was Treasurer at the time, buying in a good stock of Caliber non alcoholic lager and telling everyone after matches that it was “bloody good stuff” in an attempt to keep the till ringing. The loss of the licence was a cruel blow to the social fabric of the club at the time as players did not hang around much and went elsewhere for their pint – a definite “Low” point in our recent history.

A bit of self-indulgence if I may - I can’t remember the year , probably mid 80’s, or even what match but below is a team photo I dug out from my archives. Again, for a third eleven cricketer it was an honour to be picked to play in the company of some seriously good cricketers. For the record back row left to right Mr Torquay Cricket Club Ted Dickinson: Ian Schofield (Second team skipper); Vaughan Hosking (club stalwart and our Chairman for many years); Mike Pavey (fellow third teamer); George Cowan (what a cricketer he was who scored 50 not out on his 60th birthday); Alan Smith ( a very fine bowler); George Clake ( loyal umpire for years);

Front row left to right Yours truly; Dave Traylor (great opening batsman); Barry Matthews (club legend and Devon Captain for years); Leo Matthews (Third team skipper and one of the best blokes you could meet); Dickie Lear (third teamer and my best mate at that time); Jack Davey (professional cricketer for Gloucestershire for 17 years – what a fast bowler he was).

I rightly call this time as a personal “High.” 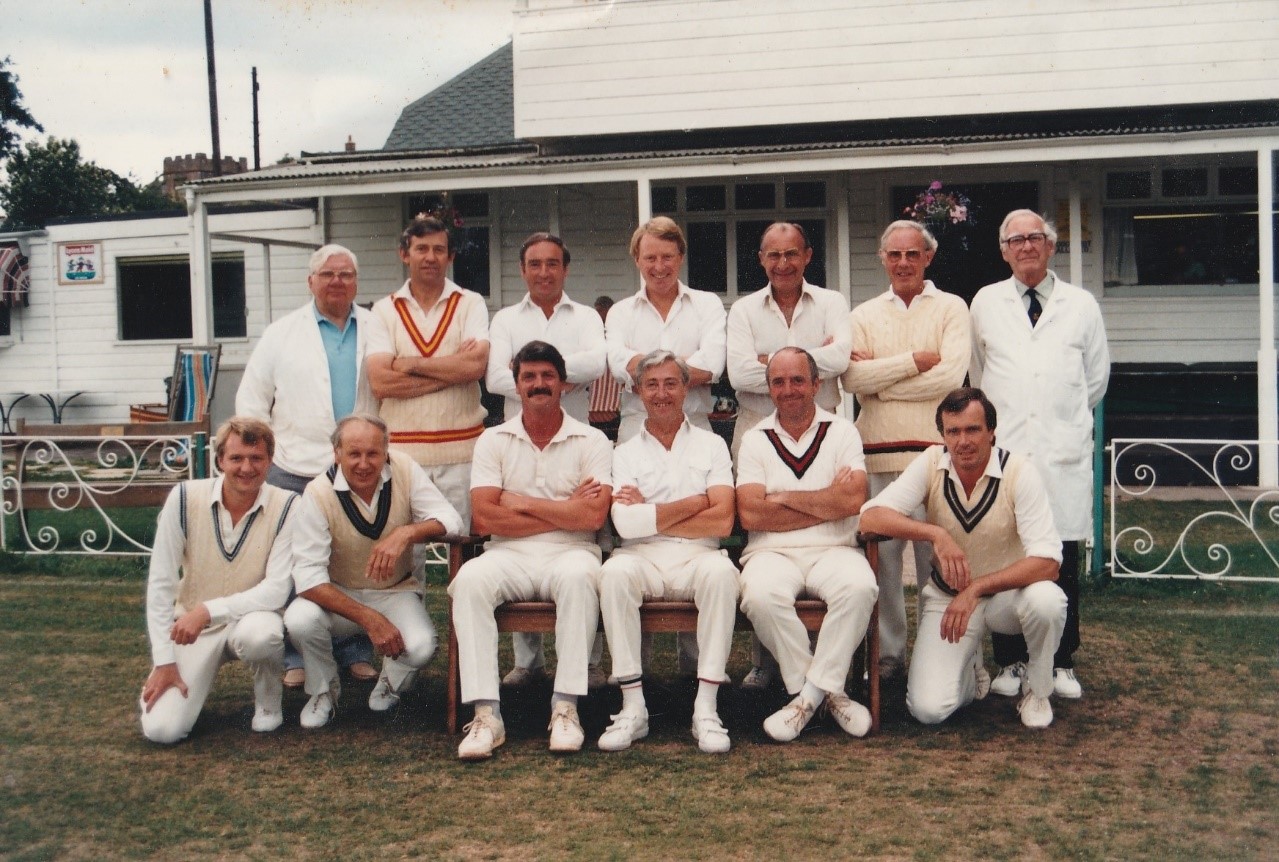 Moving on through the 90’s we saw the emergence of a very fine first team ably lead by Nigel Janes. There were so many good cricketers around the club then. Devon League Champions, enough said! A “High!”

I finished my playing career (if you can call it that) when I reached 50 which neatly coincided with failing reflexes and increasing waistline. I used to fancy myself as a good gully fielder (sometimes hanging onto a catch) but realised the game was up when the ball had hit the boundary rope before my arm reached out to try and stop the ball. The only real highlight during my playing days was to be part of the Third team that won the Brockman Cup for the one and only occasion to date.